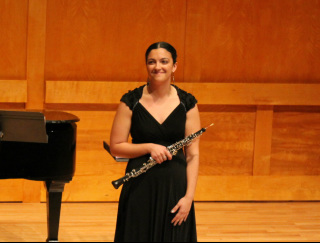 A native of Long Island, New York, Stephanie Patterson began playing the oboe at age 7. She holds a Master’s of Music Degree in oboe performance from Stony Brook University and a B.M. in Music Education from SUNY Fredonia, where she was awarded a prestigious Performer’s Certificate, and won the Woodwind Area Concerto Competition.


A current resident of Fort Wayne, Indiana, Stephanie serves as the Brand Specialist at Fox Products Corporation. Since beginning work at Fox in 2014, Stephanie has played tested and helped make thousands of oboes and English horns. Still an active performer and educator, Stephanie maintains a small private studio, operates her online oboe accessory shop (Reeds by Stephanie), is the principal oboist of the Symphony of the Lakes in Warsaw, IN, and is a contributing musician with the Fort Wayne Philharmonic.


Professionally, Stephanie has played with numerous ensembles including the American Wind Symphony Orchestra, the Western New York Chamber Orchestra, the Erie Chamber Orchestra, the Southern Tier Symphony, the Nassau Pops and the Westchester Band. While living in New York, Stephanie was a regular performer at a number of churches on Long Island and in Manhattan, and also performed in pits for musicals with theatre companies throughout the New York Tri-State Area. Additionally, Stephanie’s YouTube channel boasts over 200,000 views, with popular recordings of PDQ Bach’s “The Musical Sacrifice”, “Quodlibet for Oboe and English Horn” and Beethoven’s Op. 87. Stephanie has also worked in the world of film, acting as an “on-screen” oboist in the 2014 remake of “Annie."